The Art of A Good and Effective Apology 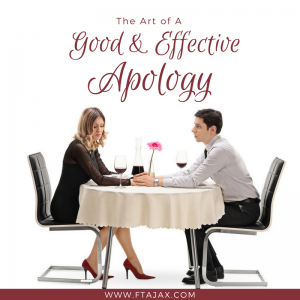 Apologizing: I think it’s safe to say that we all agree apologizing is a good thing. We know we need to do it when we are wrong – we value “saying sorry” as the “right” thing to do. Actually putting it into practice and making that apology an effective one…that is a whole other story.

Why are sincere apologies so hard?

For starters, I think the main reason is that the majority of the time, we don’t want to admit to ourselves and/or the other person that we’re wrong. Our natural tendency is to want to “save face.” Admitting we are wrong makes us vulnerable. We risk being rejected by others if we allow them to see our errors for what they are.

Another reason why apologizing can be so hard – sometimes the situation is messy! The conflict may be multi-layered and complicated making it difficult to know who is clearly “right” and who is clearly “wrong.” This can make apologizing difficult because a) we aren’t certain about whether or not we should apologize, or what exactly to apologize for, and b) we are afraid that if we apologize for our part in the conflict, the other person will think we are letting them off the hook or that they don’t have to take any responsibility in the situation.

An effective apology can make a big difference!

But have you ever had an experience where someone came to you and sincerely apologized? How did it make you feel? Chances are, it allowed you to soften toward them and have empathy and compassion. Their admission of guilt and willingness to take responsibility, if done in humility with genuine remorse, probably didn’t make you think less of them. In fact, it probably made you respect them more. This is an indication of an effective apology.

Research has found that apologizing helps not only the person receiving the apology but also the person offering the apology! Offering a sincere apology helps release the pain of the offense allowing the focus to shift to healing the relationship.

What if I don’t know what to I apologize for?

When you’re not sure whether you’re at fault or what exactly you need to take responsibility for, I suggest asking a neutral third party for feedback. Give them the facts without trying to “spin” the situation to paint yourself in a positive light. Try to be as honest, forthcoming, and objective as possible. Then invite them to weigh in on what aspects of the situation are your responsibility to apologize for.

It’s true that there is no guarantee the person you are apologizing to will respond in kind but your chances of getting a humble apology from someone are much greater when they feel safe with you. It’s much easier for them to lower their defenses and look at themselves honestly when you’ve shown willingness to do the same.

What to Avoid When Apologizing

The apology that negates itself.

When we say “I’m sorry, BUT…,” anything said after the word “but” pretty much negates the apology. Even if you’re only 10% wrong, and the other person is 90%, own your 10% and apologize for that specific portion of the conflict. You may need to wait a bit to address your concerns about the other person’s behavior. I’m not suggesting you brush it under the rug; just don’t bring it up in the same sentence as your apology.

The “get off my back” apology.

What’s really being communicated here is: “I’m just saying I’m sorry so you’ll leave me alone about this and not make me feel uncomfortable anymore.”

Maybe you’ve heard someone say, “Well, I’m sorry you feel that way.” Another common sarcastic apology is, “I’m sorry you’re so sensitive.” Apologies of this nature place the blame on the other person for their feelings or perceptions. It is important to take responsibility for how you may have come across.  After all, sarcasm is the complete opposite of sincerity.  In order for any repair to happen in the relationship, apologies must be sincere.

How to Express a Good and Effective Apology

Start with by checking your body language and tone of voice.  They need to match the words you are using and the message you want the other person to receive. Convey respect and humility by using a softer tone and maintaining a relaxed stance. This does not mean you need to grovel in shame. You can apologize with humility and also maintain your dignity.

When the Sincere Apology Isn’t Enough.

Maybe there’s something you’ve done in a relationship that seems irreparable – you’ve tried making it right with the other person but the wounds are just too deep. Perhaps the conflict is too messy and complex to sort out on your own.  We are here and more than happy to come alongside you and help you work through the problem together.  Schedule an appointment  – it could make all the difference in repairing and restoring your relationship as well as your sense of worth and dignity if the mistakes you’ve made have got you weighed down with shame.

© 2022 · Family Therapy Associates of Jacksonville · Website developed by Dr. Tabitha Johnson. This website and all content within is for informational purposes and is not intended to diagnose, assess, provide treatment or advice. The content within this website is not a substitute for professional or medical services.