Demystified: Why Men and Women Think Like They Do 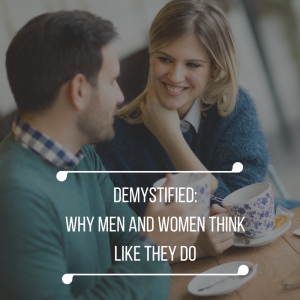 Have you ever tried to talk to your partner and felt unsure if they heard a word you said or even noticed you standing there? Chances are your answer is yes. Most of us can remember a time when we felt like we were talking to a brick wall or speaking another language. No, we aren’t speaking a different language. However, there are fundamental differences in how men and women think. There’s also an explanation…it doesn’t have to be a mystery.

Research shows that women speak 25,000 words per day while men only speak 12,000. This statistic demonstrates just one way that men and women are so different in how they process information and communicate. It might help to think of these differences by comparing the brains of men and women to waffles and spaghetti. Believe it or not, this can help you understand why men and women think as they do. Take a look below – I bet many of these scenarios will sound familiar.

Men process life in boxes, or compartments, that are all separate from each other and make “holding places” for their thoughts, feelings, ideas, memories, etc. They think by focusing on one box, and usually one box only, at a time. For example, when a typical man is at work – he’s at work. When he is at home – he is at home. When he’s watching TV or involved in a task, he’s not using thinking about anything other than what he’s focused on doing.

Most men are problem solvers by nature. You tell them about a problem, and they focus on it and get to work formulating a solution. Sometimes this can feel frustrating to the partner if they are simply seeking a listening ear, a hug, or some encouragement. Yes, it’s a valid attempt to help, but many women describe feeling unheard and dismissed when their partner goes into problem-solving mode.

Men are often motivated by success so they often spend the majority of their time focused on the “tried and true” boxes that have worked for them in the past. In turn, they tend to ignore the compartments that confuse them or make them feel vulnerable or weak. This affects how they communicate as well. If they feel like they can talk to their partner and reach a desired solution, they are more motivated to communicate. However, if they don’t understand what or why their partner is communicating, they will often shut down.

Men like to know what to expect and like to know what’s coming next. They tend to stick to the things they know and are good at – he knows these things will make them feel good and feel good about themselves. This can be a communication barrier when women tend to think more emotionally and therefore are more “unpredictable.” Men often feel overwhelmed or frustrated in new territory where they are unsure of what to expect.

All Things are Relational

Unlike how men think, women’s thoughts are much like a plate of spaghetti. Their thoughts intersect with other thoughts and ideas. Sometimes they seem to be connected in a way that is generally more difficult for men to follow. Women process life differently with every thought connected to another in some way.

A typical woman can do multiple things at one time – talk on the phone, keep an eye on the children, think about a to-do list for tomorrow, wash dishes and keep an eye on the meal she is preparing without breaking a sweat. Women’s thoughts, feelings, and ideas are connected and therefore, women can process more information and track more things simultaneously.

Women think by connecting life and they thrive on making those connections. Women have a greater need to make sense of things and talk things through. Unlike men, they do not always need a solution. Instead, they can link together logic, emotions, relational aspects, and the meaning of an issue…simply by talking through it!

Through discussion, women can often come to a greater understanding of things and thus reach their “solution” despite it not necessarily being a solution per se. When women do this, it feels overwhelming for men because they are trying to shift gears from box to box and keep up. In the end, she feels better but he usually feels frustrated and overwhelmed.

So what can you do with this information?

In short: understand, acknowledge, and communicate. It’s okay that we all think differently.  The difference isn’t only based on gender either! We are completely different people who were raised differently and exposed to different influences.

We can be more accommodating when we understand how our partner communicates. When a woman asks, “Is now a good time to talk?” she is setting the stage for a successful interaction. This provides the man, who is more aware of his tendency to compartmentalize and focus on one thing at a time, the opportunity to let their partner know they are in the middle of something and set a time to talk later.

Women, who are more aware that their partner feels dismissed when they are multitasking, can make a conscious effort to stop what they are doing and give their undivided attention. Like the earlier example, they can let their partner know they are in the middle of something or are distracted and ask to talk later. Just make sure to follow up and agree on a time when it will be a good time for you to talk.

Understanding the differences between how men and women think, communicate and connect can feel overwhelming. If you’d like more individualized assessment and support in communicating more clearly with your partner, contact us today to schedule an appointment. You might also enjoy our upcoming Luxe Couple’s Retreat where an entire day is focused on mastering communication skills.

© 2023 · Family Therapy Associates of Jacksonville · Website developed by Dr. Tabitha Johnson. This website and all content within is for informational purposes and is not intended to diagnose, assess, provide treatment or advice. The content within this website is not a substitute for professional or medical services.